Back to articles
By Caroline Jacobson 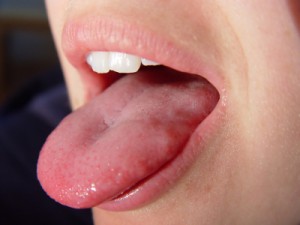 As you sit at your desk dreaming about dinner, take a moment to thank your taste buds. Without them, our 3 daily meals would be dull and tasteless. Taste buds are small sensory organs that are found in the little bumps (also known as papillae) on our tongues and are the primary reason we can enjoy our favorite foods. Our tongue is a very small organ, but it contains about 8,000 taste buds, which are replaced every two weeks. Our taste buds have microscopic hairs, called microvilli, which pick up dissolved chemicals from food and send electrical signals to our brain that tell us what it tastes like. Our taste buds distinguish between five different tastes:
1) Sweet
2) Bitter
3) Savory
4) Salty
5) Sour
Taste Bud Map Have you heard of the “tongue map?” Many people have been told the taste buds for “sweet” are on the tip of the tongue; the “salt” taste buds are on either side of the front of the tongue; “sour” taste buds are behind this; and “bitter” taste buds are way in the back. The tongue map dates back to 1901 and was researched by a German scientist named D.P. Hanig. He discovered the four basic tastes – sweet, sour, bitter and salty. Kikunae Ikeda identified a fifth taste, umami, in the early 1900s. This is the taste of glutamate, common in Japanese foods, particularly Kombu, a type of sea vegetable similar to kelp. But researchers in the 1970s determined the tongue map was a century-old myth that no one challenged. In fact, all parts of the tongue can detect these common tastes. And it’s not just your tongue that gives you insight into what your food tastes like. Other factors, such as smell, spiciness and texture also contribute to flavor. So while you may have at one point tried to trick your taste buds, they are smarter than that! Because of the little grooves the taste buds make on your tongue, it is also a breeding ground for bacteria. This can contribute to bad breath that is hard to control. To counter your dragon breath, try to use a tongue scraper. It removes bacteria and can help freshen your breath!